How Do Cochlear Implants Work?

Sensorineural hearing loss affects millions of Americans every year. Although the greatest likelihood of hearing difficulties is found in the elderly, affecting 50% of those 75 and older, around three children out of every thousand are born with a noticeable degree of hearing loss in one or both ears. That makes for a lot of people asking you to repeat what you just said.

Although hearing aids can be useful and have certainly come a long way since the era of ear trumpets, their purpose is to amplify noise into the wearer’s ear to a level that can be detected by intact inner ear hair cells. For individuals with profound deafness or severe hearing loss, a hearing aid may have very limited benefit. Enter cochlear implants.

The History of Cochlear Implants

One of the earliest records of the concept of electrically stimulating the sensation of hearing dates back to the late 1700s with Italian Alessandro Volta applying a 50-volt charge to his own ears. Although his notes on this experiment concluded that it produced a “disagreeable sensation”, it paved the way for the development of a more agreeable, sound-restoring device known as the cochlear implant. Further efforts from teams around the world demonstrated that directly stimulating the auditory nerve responsible for hearing with an electrical current would be able to produce the sensation of sound in an otherwise deaf ear.

The first chapter of the practical development of the cochlear implant took place in California in the 1960s with various experiments and clinical trials conducted by different research groups across the state. The first true cochlear implant was surgically inserted by otologist William House and neurosurgeon John Doyle in Los Angeles in 1961. Setting the audiology world all abuzz, in 1973 San Francisco hosted the first international conference with the catchy theme of “the electrical stimulation of the acoustic nerve as a treatment for profound sensorineural deafness in man.” 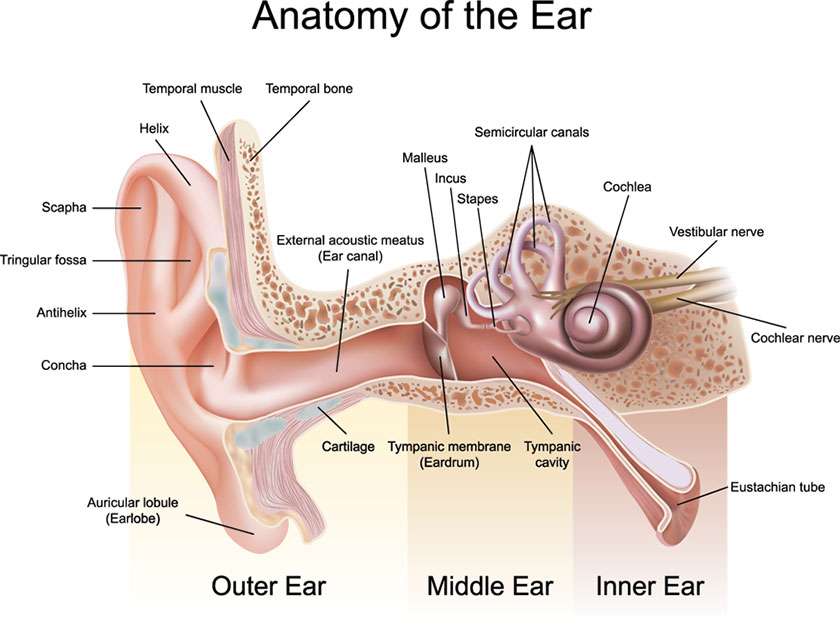 The cochlea is part of the inner ear that is spiral-shaped and looks like a sea shell. In a normal ear, the sensory hair cells in the cochlear of the inner ear respond to soundwaves by generating electrical impulses, which travel through the auditory nerve to the brain for interpretation. In an ear suffering from sensorineural hearing loss, these hair cells are damaged with the extent of the damage relating to the degree of hearing loss. As hearing aids function by amplifying sound to a level it can be detected by the remaining hair cells, an ear with very few functioning hair cells won’t find them particularly useful.

Cochlear implants basically bypass the sensory hair cells by directly transmitting electrical impulses to the auditory nerve in response to sound. A typical cochlear implant consists of an external component that sits over the ear, and an internal part that requires surgical implantation. The microphone hooked over the ear detects sounds from the environment and sends these signals to the speech processor sitting nearby within the same casing. The speech processor does more or less what its name suggests, and then sends this information via a small wire to a transmitter, which codes the digitized signal from the processor and passes it onward to the receiver. This is where the love of hearing goes farther than skin-deep as the receiver is implanted under the skin and is magnetically coupled to the transmitter above the skin just above the ear. This internal receiver then converts the signals from the transmitter into electrical impulses, which are then sent to the electrodes implanted within the inner ear. These electrodes stimulate the auditory nerve directly, which then passes these neural impulses to the brain and voila – we have sound.

Who Is Eligible for a Cochlear Implant?

Just like the color orange doesn’t work on everyone, neither do cochlear implants. Hearing loss can come in varying degrees of severity and from different causes and a cochlear implant won’t be suitable for all cases. Hearing difficulties from conduction problems, such as a hole in the eardrum or cerumen impaction, or auditory processing disorders, when the patient’s ears and brain are not quite coordinated, will not benefit from cochlear implants.

Individuals with severe to profound hearing loss in both ears may be eligible for a cochlear implant. Other factors to consider include:

In the US, over 58 000 cochlear implants have been implanted in adults and over 38,000 in children. Cochlear implants are FDA-approved for children as young as 12 months old in order to make the most of their critical speech and language development period. Hearing is vital for language skills and also for hearing a parent calling them downstairs to wash the dishes (but even with normal hearing this may not have a 100% success rate). Research has found that children with a cochlear implant inserted before 18 months of age are capable of developing language skills at a similar rate to their peers with normal hearing. Delaying a cochlear implant in a suitable child can make it more difficult for them to learn to comprehend speech and music later in life.

It’s important to understand that a cochlear implant does not restore normal hearing. The brain still requires some adaptation around this new sensation and the processing of these signals passing through the implant. After the device has been successfully implanted and fine-tuned, a patient typically undergoes the process of audiologic rehabilitation to learn how to use the implant and interpret the sounds it produces. The rehabilitation team may include an audiologist, speech-language pathologist, and counselor.