What You Need To Know About Earwax, Q-Tips And Ear Candles 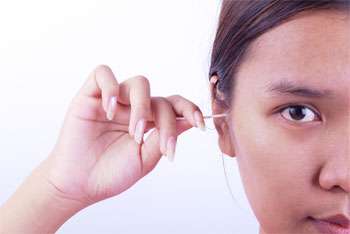 Most of us were taught to clean our ears with Q-tips to remove earwax. It was considered part of a good hygiene routine. Today’s medical advice is quite to the contrary. Experts in ear health, including the Mayo Clinic, are recommending that we put down our Q-tips and keep our fingers away from our ears because it just makes earwax problems worse. Efforts to clean our ears may impair our hearing. Here are the important things you need to know about earwax, Q-tips and keeping your ears clean.

Let’s start at the beginning. What is earwax?

The skin in your ears produces an oil called cerumen, commonly called earwax. It is designed to protect your ears from dust, dirt and microorganisms that could damage structures deeper inside, like your eardrum. Earwax also protects your ear canal from irritation due to water. Earwax is an important filter at the door to the ear’s delicate ear canal and hearing mechanism.

In most people, earwax makes its way to the opening of the ear where it is washed away or falls out. Some people produce an excessive amount of earwax and physicians don’t know why. If an excessive amount of wax does build up in the ear and doesn’t naturally fall out on its own, it may harden. This is where Q-tips become a problem.

If excessive earwax does harden, cleaning your ears with a Q-tip pushes the earwax further into the ear canal rather than removing it. According to the Mayo Clinic, excess earwax “doesn’t automatically lead to blockage. Using cotton swabs, bobby pins or other objects in the ear canal can push wax deeper, creating the blockage.”

Although physicians don’t know why some bodies produce more earwax than others, they do know that you are more likely to have wax buildup if you frequently use earphones. That’s because ear phones prevent earwax from coming out of the ear naturally, as it is designed to do.

How do you know if you have excessive earwax?

There are several signs and symptoms:

Unremoved earwax buildup can lead to infection. Contact your doctor if you experience the symptoms of infection, such as:

Of course, hearing loss, dizziness and earaches may have many other causes. It is important to see your ENT doctor if these symptoms are frequent. An exam will determine whether the problem is due to excess earwax or another health condition.

Can you remove earwax?

If you have an excessive amount of earwax only your physician should clean it. To try to do so yourself will risk damaging your ears and your hearing. Earwax removal is most safely done by a doctor. Your ear canal and eardrum are delicate and can be damaged easily by excess earwax.

Our recommended methods for ear cleaning are as follows:

Follow your physician’s instructions for any type of home earwax removal. Most cases of earwax blockage respond to home treatments used to soften wax which can include:

Caution is advised to avoid having your ears irrigated if you have diabetes, a hole in the eardrum (perforation), tube in the eardrum, skin problems such as eczema in the ear canal or a weakened immune system.

Manual removal of earwax by an otolaryngologist is the safest and most effective method. The physician will use special miniature instruments and a microscope to magnify the ear canal and then remove the wax.

You may see or hear about another earwax cleaning method called “ear candles.” Do not buy them. The Food and Drug Administration (FDA) warns that they may not be safe. Also known as ear coning or thermal auricular therapy, the treatment involves inserting a lighted tube of fabric coated in beeswax or paraffin into the ear. The theory is that the suction produced will pull wax out of the ear canal. According to the FDA, the use of these candles can result in:

If you have trouble hearing, come see us. We will conduct a hearing exam to determine the cause of your hearing loss and recommend appropriate support that can improve and increase your hearing. If the cause is excessive earwax we will remove it. It is possible to maximize your hearing and our tests and hearing aid technology will help you achieve that.