Hearing works sort of like hearing aids: small pieces of advanced-level (organic) technology working together to produce sound. It does this by converting sound waves into sound by passing those waves through the outer ear, through to the middle and inner ear then on to the brain which interprets them.

Specifically, the ear consists of three main parts as you can see in the diagram below:

The way hearing works is by sound traveling through the air in waves which result in a series of vibrations within the ear.

Second, vibrations from the eardum are passed to the bones in the middle ear which also causes them to vibrate.

Third, vibrations (sound waves) from the malleus, incus, and stapes bones pass through to the cochlea in the inner ear where there are small hair cells and fluid that pass signals to the auditory (acoustic) nerve. The cochlea is a snail shell-shaped organ that contains a narrow end that picks up low frequencies and a wider end that picks up higher frequencies. The auditory nerve, having received its signal from the cochlea, then signals the brain to understand and interpret it into sound.

If any bone, organ, or nerve are malfunctioning, hearing loss can result. Make sure to regularly schedule appointments with your L2L hearing specialist if you detect any degree of hearing loss. Improving hearing loss with hearing aids is a simple and quite common solution. Approximately 30 million adults wear hearing aids in the US. Ignoring your hearing loss, however, can result in isolation, clinical depression, anxiety, diabetes, heart disease, and dementia.

How Hearing Works – An Illustration 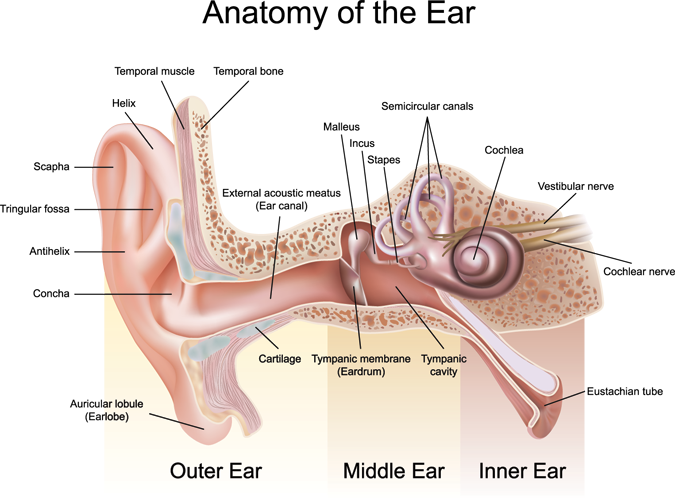